Alternatively contact me (Paul Budding) by email. My email address is paulbudding@yahoo.co.uk

“Polling data demonstrates the Democratic Party’s base of voters are ready for a more progressive agenda. Though the party elites may be ‘divided’ the base is not; they are ready for unabashed progressive politicians.”

NOTE: I am accepting $1 contributions up until (and including) 1st October 2019. The reason for this is because I am determined to get this project off the ground and ultimately make our UBI video go viral.

Brits will be interested to know that when the video is published I will make sure that many progressive members of the the Lib Dems and Labour get to see it.

I am asking for $20 (£16) contributions. This will pay for professional online videos that  will go viral. I will hire former ITV and BBC News reporter, Anna Brees to put these videos together. Anna has gone freelance and that is very convenient for this Project. Having been quoted a price by Anna for the video (£500)… I am now asking the wealthy (Silicon Valley millionaires, to pay more than the $20. I am asking them to cover the costs of the video as much as they are willing to do so). My determination to make this work is crystal clear. I want the UBI video to go viral. This issue has still not got off the ground in the UK. And yet, generous UBI will be one of the most progressive policies in history.

Once I have received sufficient level of contributions towards this project, I will work on the wording concerning the type of things I want Anna to mention in the report. I am not going to write the report here but Andrew Yang and Scott Santens will be mentioned because they are the key people making the UBI idea entirely mainstream. Others who will be discussed in the video include Ray Kurzweil, Elon Musk, Sam Altman, and Richard Branson. But my main focus will be Andrew Yang as he (above all else) is putting UBI on the map. Once we have a slick, professional video online then the #YangGang and other UBI supporters around the world, will make it go viral. And as we get closer to UBI becoming a reality I will hire Anna to put together another video as the idea of UBI is only going to get bigger and bigger. Its time has come.

Note that I think the progressive left in both the U.S. and UK will embrace UBI. Because technology is changing capitalism. Capitalism is transforming itself, becoming narrower and narrower. It is inevitable that progressives will pull the UBI lever in order to eradicate income poverty once and for all. Hence, I am convinced that this is going to appeal to the left of the Democratic Party in the U.S., and appeal to the left of the Lib Dems in the UK and also to the Labour Party in the UK. Hence, while Andrew Yang is the figure that I think is currently investing the most time and energy in advocating the UBI policy, I am also very interested in the two other Democrats who are pursuing it (Williamson and Gabbard) and I am also very interested in the ideas of Alexandria Ocasio-Cortez and those closely associated with her.

Yang focuses on automation as making the UBI policy imperative. As more and more jobs are lost to strong Artificial Intelligence, capitalism narrows in only serving a smaller amount of people. In general, people have always worked for the system. Yang rightly thinks the system should work for us and then physical and psychological illness is reduced and quality of life increased. Yang rejects looking at economic growth as a measurement of how well we are doing because economic growth only tells us how well the rich are doing.

I was following Yang on Twitter when he only had a few thousand followers. Now he has more than 755,000 followers.

If interested in being one of the heroes who gets this idea to go viral then please make a $20 (or £16) paypal payment to paulbudding@yahoo.co.uk

And of course, you should also email me (or fill out the form above) and then I will definitely keep you updated on progress. My email address is the same as my paypal account address.

Democratic presidential candidate Andrew Yang says his “freedom dividend” plan of $1,000 a month is “about everything but the money” https://cnn.it/2H5Cs9k 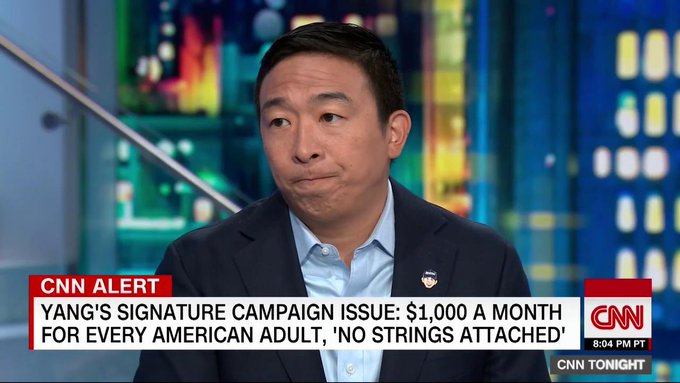 One of the things I like about the idea of Universal Basic Income is that it would be impossible for a future Thatcherite (or Republican in the U.S.) government to get rid of it (as with Universal Health and Universal Education). I also (rightly or wrongly) think the middle class are getting more insecure.